To maintain the electric grid and roads, let the market work instead of burdening those who invest in clean technologies.

BRUNSWICK — Gov. LePage and his allies are kicking up dust on two energy issues with important economic implications for Maine’s future.

It serves no purpose to penalize Mainers who invest in cleaner technology that benefits everyone. In the case of solar, the free market has resulted in about 8,000 solar installations in the state, mostly residential. These homeowners are taking a financial risk, albeit a small one, by going solar. The same is true for the buyers of electric and hybrid cars. In both instances, the higher up-front costs are offset by the expected long-term savings and immediate benefits to the environment.

The right way to maintain the electric grid and roads is not to discourage the use of solar, clean cars and other promising energy technologies. The answer is to adjust the revenue system, which is falling behind. Relying on gasoline taxes to finance road work is fine if everyone uses internal combustion engines – but that train is leaving the station.

So, it’s time to be creative in the direction of toll roads, weight-based vehicle fees, bonds and other methods to supplement fuel taxes. 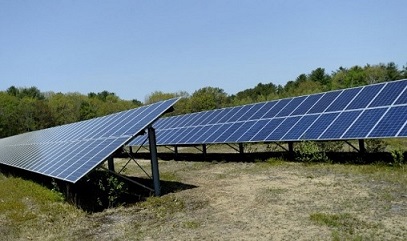 Clean technologies benefit all, says writer who urges ___ Gov. LePage not to resist green technologies. ________ Staff photo by Shawn Patrick Ouellette
Regarding maintenance of the electric grid, the governor wants us to sympathize with Central Maine Power, a monopoly largely owned by a Spanish affiliate, which enjoys a guaranteed return on investment of 10 to 12 percent under state, regional and federal laws. My gosh, who makes that kind of money?

Should we stifle solar energy because of CMP’s sweetheart deal and an antiquated utility framework? Why not reduce CMP’s return guarantee? Or change the laws to expand CMP’s distribution role to power generation? CMP could build solar farms and use the

revenues to keep our telephone poles vertical. Or maybe it’s time to consider public ownership of the grid, rehiring CMP employees and saving the 10 percent of our electric bills going to investors in Spain and elsewhere.

The CMP business model clearly isn’t working when the utility and the governor team up to suppress new energy technology. At the root of the problem is the arbitrary cap on how much solar energy people can produce. Homeowners are credited only for the solar kilowatt-hours that match their annual household demand. No more – let’s unshackle entrepreneurship and let the market work. Let people build larger solar installations if they want, provided they meet all safety, zoning and environmental standards.

The governor would do well to read some history about the decline of gas lights, steamboats and coal-fired residential boilers. Times change and technology generally gets more powerful, efficient and cleaner.

There’s no reason to resist better ways to do things and then blame Mainers who invest in them, especially in the area of solar energy, where Maine is lagging behind many other states and where we, as a nation, are trailing the likes of China, Chile and Germany.

If environmental costs were considered correctly, solar energy and clean-car users wouldn’t be straw men to blame; instead, they’d be respected scouts, visualizing the future and offering clues about the best ways forward.

As the Maine Legislature and Public Utilities Commission debate the alternatives, hopefully they’ll at least look in the right direction. It’s not about curtailing emerging markets or worrying about who’s not going to the gas station. It’s about updating our aging tax and revenue policies to keep up with the times.

Jake Plante, a Brunswick resident and author, worked on environmental and energy issues during his 27 years at the Federal Aviation Administration.